I can officially say that I am an Ultra Marathon runner!  I completed the Forget the PR 50k in just under 8 hours.  I spent the weeks leading up to the race training in the woods with friends and continued to doubt myself if I would be able to finish the 31 miles in the 10 hour time limit.  Our training runs were slow as I was learning how to navigate trails and tree limbs.  The weather was less than ideal when we were training, so as long as it wasn’t raining on race day, it was going to be insanely better than what we were used to at this time of year.

The morning of the race we picked up our bib numbers and had the pre-race meeting.  We collectively took the Special Olympics pledge as the race was benefiting that wonderful organization.  We all head out to the start line and at some point we were told to go, I didn’t head anything just saw people start to jog.  The race starts off a bit slow as you are running around a campground area before heading into what is called “Big Ass Hill.”  Excuse my language, but it literally has signs starting up the hill with those words.  NOTHING in my training runs had prepared me for this hill.  You think that when you’re almost to the top, you come to find out that you’ve only made it to the half way point.  As I was climbing the first time, I kept thinking to myself, “how in the world am I going to climb this hill a second time more than half way through the race?” 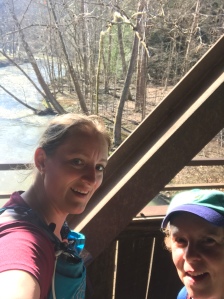 I picked up a group of runners to pace with and they pushed me through the beginning part of the race.  I love the downhills and can generally fly down them.  I did crash and burn on one downhill, I alerted the runners approaching behind me and yet the runner right after me (about a minute behind) fell in the exact same spot.  It’s always the little roots that get you.  The group I was running with for the first 19 miles would get a little lead on me on the uphills and I would catch up on the downs.  It was a nice balance.

At mile 19, we started the second loop.  At mile 22, we climb Big Ass Hill for a second time.  Seriously, what race director would do that to these runners?  I thought about crawling up the hill because some how that seemed like it may be a faster option.  I made it up that insane hill for a second time.  The group I was originally running with left the aid station before I did so I picked up a new friend.  This guy can only be known as pajama guy.  He started the race in red long johns and a fur hat (he ditched the outfit when the temps reached the 60s).  I had told him it was my first ultra and that I was fairly new to trail racing in general.  He stuck with me for the remaining 11 miles.  It was another story of he’d push ahead on the uphills and I’d catch up on the downhills.  He was constantly giving me encouraging words and advice.

The final five miles were the most challenging.  Not because I was tired, I was.  I had developed a large blister on the ball of my left foot.  I had never experienced that with my training runs and I could really feel it on the downhills.  My strength was inevitably taken away from me. I walked a lot more during the last 5 miles than I would have liked. I know I will need to do something to prevent blisters during my 50 miler.  I need my downhill running!

I finished the race (31.6 miles) in 7:58:52 with friends and family waiting at the finish line.  I thanked Pajama guy and two others that were with us as they motivated and pushed me during the last 11 miles.  The race director came over and shook my hand as he gave me the buckle.  I signed the pole holding the finish line like all first time 50k finishers and officially got a PR!

I am a mom to a beautiful daughter and a handsome son. I married my high school sweetheart during a blizzard in 2010. I like to run, bake, craft and of course spend lots of time with family. This blog is about fitness, health, activities for the family, and general lifestyle information. View more posts